The Paradoxical Duality of Cat-calling as a Trans Woman 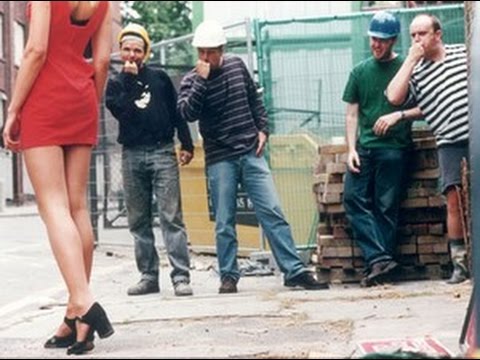 It doesn’t happen often but last night I got cat-called. I was walking back to my car at a gas station and there was a group of guys standing around outside. Already on edge, one of them calls out “Hey sweetheart, how’s it going?” Many feelings rushed through my head as I answered back “I’m good” and tried to get in my car as fast as possible.

One of the feelings I felt was fear. I was afraid that my response “I’m good” would clock me cuz of my voice and that the man, having clocked me, would feel his masculinity is threatened and then proceed to beat the shit out of me, hence getting in my car as fast as possible.

Another feeling was disgust. I was disgusted at how piggish men can be towards women and felt a twinge of injustice in solidarity with other woman-identified people who get cat-called.

But here is the paradoxical feeling: In addition to fear and disgust, I also felt a boost to my self-esteem because being cat-called is an indication that hormones and my presentation are working such that people perceive me to be female. That is my goal, and it feels good to get positive evidence of getting closer to that goal.

I have seen TERFs talk about this as another example of why trans women have male privilege and don’t understand what it’s like to be a woman: according to them we like being cat-called. But that’s not true at all. The response is paradoxical because it contains within itself competing elements of fear/disgust and a positive feeling of gender euphoria at evidence of “passing” as your identified gender. It’s not that I liked being cat-called – I was afraid of being beat-up or worse and my deep feminist intuitions scream at the horribleness of cat-calling as a phenomenon that negatively affects women. It’s not so simple as either liking it or not liking it. But I would be lying if I said that I had zero positive feelings at being cat-called – the negative feelings were mixed into the positive feeling of gender euphoria, at feeling like I am passing and attractive.

I would be curious to know if cis women ever feel this paradoxical feeling as well e.g. feeling like your outfit and hair must be killing it today because you got cat-called which is unusual for you but also feeling disgusted at the misogyny on display while also feeling fear. I’ve never asked a cis woman about this so I don’t know for sure but I would wager that some cis women do in fact feel the paradox as well.

But I would also wager that for trans women the paradox is felt to a greater extent. For many trans woman, including myself, passing is of great importance and sometimes it’s difficult to garner “objective” evidence that you are passing. Cat-calling is a form of evidence and thus brings with it a positive feeling associated with feeling like you are passing. Nevertheless, we need to do a better job of raising young men to also feel disgust at the practice of cat-calling and call-out and shame fellow men for doing it when they see it.